When you need to separate or overlap two beams on the optical bench or in a product design, the solution is most often the humble but elegant beamsplitter. In this tech note, we’ll look at the types of beamsplitters that AccuCoat can provide, and a number of the applications they serve.

Depending on the coating applied, a beamsplitter may be designed to perform one of the following functions:

Regardless of the coating type, glass is a natural choice for beamsplitter substrates. It lends itself to broadband, high-tolerance prisms and cubes, and offers the strength and durability to create thin plate beamsplitters that minimize beam walk-off. AccuCoat also coats many beamsplitters on plastic and polymer substrates and assemblies, as well as on crystals like sapphire and silicon.

Intensity beamsplitters: Getting the right ratio 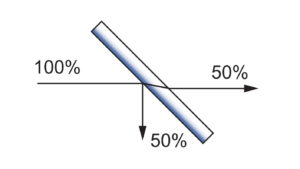 The first class of beamsplitters we’ll discuss can be used to split the power of a light beam into two separate paths. This is common in interferometry, imaging, and for feedback loops in optical systems.

The beamsplitter acts to divide the light’s intensity in a given ratio over a range of wavelengths, generating two beams with the same spectral composition, if not the same intensity. The example below shows a standard AC300 beamsplitter designed for 450-650 nm operation, and reflects 50% of the light while the other 50% is transmitted. Common split ratios include 50/50, 70/30, and 80/20, though a beamsplitter can be designed to transmit or reflect as little as 5-10% of the light for monitoring purposes. 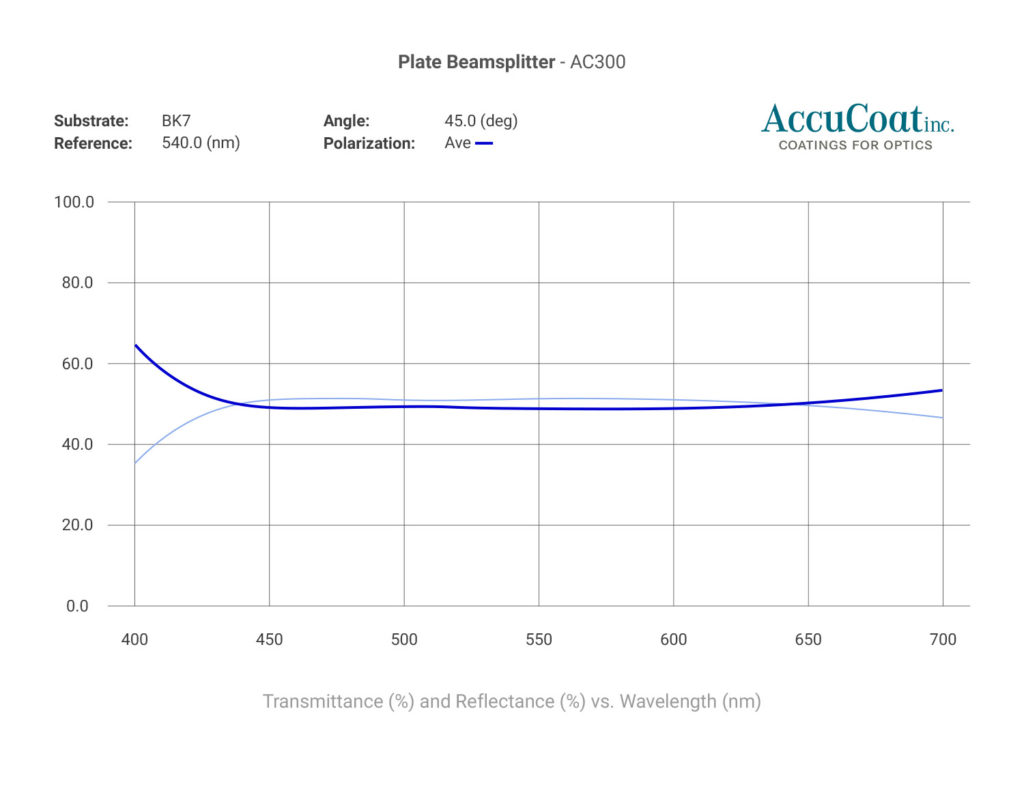 Many plate beamsplitters used for intensity splitting are designed for 45° AOI, though we routinely work at 30-45° AOI, and up to 60° or larger upon request. Not all beamsplitters are coated on plates or flat substrates, however. In augmented reality (AR) and mixed reality (MR) headsets, LCDs mounted to the left and right of the eye project the computer-generated image onto optics designed to route a portion of that light to the eye. Those optics have a beamsplitter coating designed to simultaneously reflect a portion of the projected image into the eye and transmit light from the environment, overlaying the two images to create the augmented reality scene. Both plate and curved beamsplitters are used in AR and MR headsets, each of which must be able to perform over a very large range of angles. The split ratio of beamsplitters used in these headsets range from 50/50 to 80R/20T to get the right balance of natural and projected light for the given external conditions, while minimizing the power needed to create the projected image.

This brings us to a challenge often seen in beamsplitter design and manufacture. Beamsplitters operating at large AOI and/or over a wide range of angles tend to exhibit polarization splitting, resulting in unequal distribution of s- and p-polarization in each beam and skewing the purity of the split. At AccuCoat, we mitigate that issue using a proprietary metal-dielectric hybrid coating that performs very effectively for 70/30 and 80/20 beamsplitters with a minimum of polarization splitting.

Beamsplitters can also be designed to operate as attenuation filters, as in the case of reflective neutral density (ND) filters. Inconel coatings in various thicknesses can be used to provide 5-90% transmission over a broad band of wavelengths very effectively simply by reflecting the unwanted portion of light. 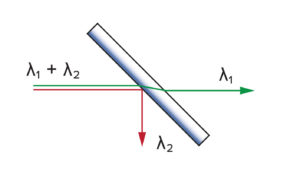 The second class of beamsplitters we’ll discuss can be used to separate or combine light by wavelength, and are most often referred to as dichroic mirrors. They are essentially dielectric filters operated at an angle, allowing one range of wavelengths to be transmitted while another range of wavelengths is reflected. This includes long-pass and short-pass edge filters as well as hot and cold mirrors. In most cases, it is essential that the beamsplitter provide good distinction between transmission (>95%) and reflection, transmitting less than a few percent of the reflection band. While we do not offer blocking designed into our beamsplitters, we can provide these coatings on absorptive glass or plastic for special cases to further enhance the beam purity. 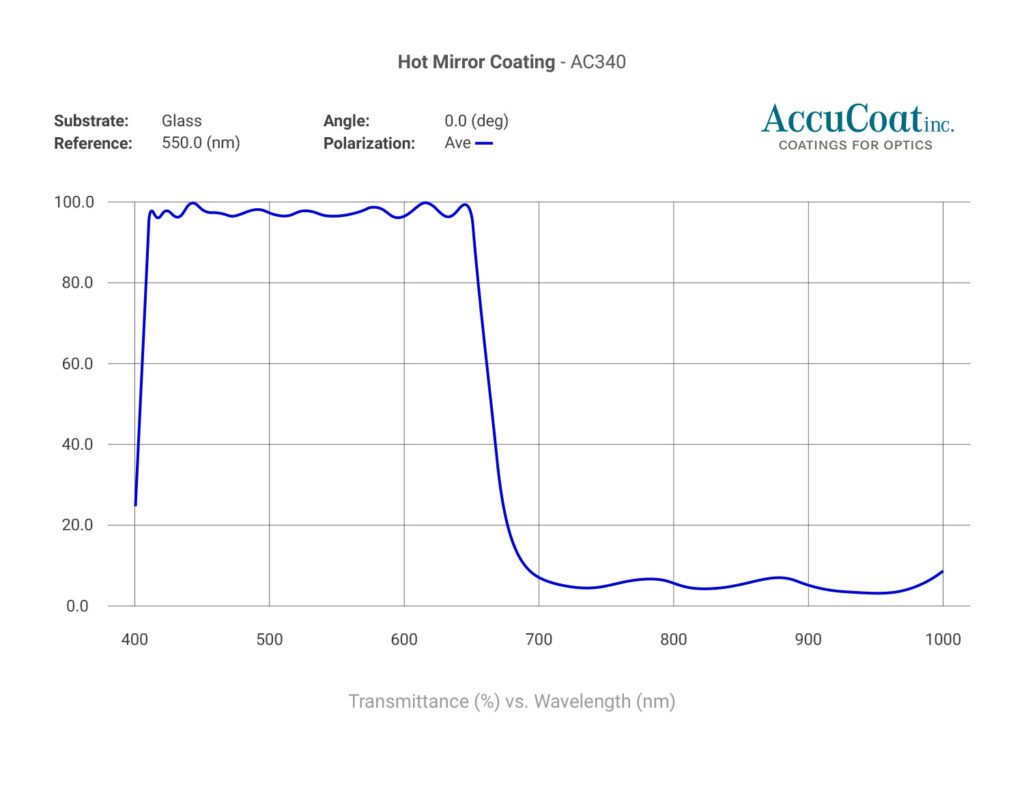 Hot mirrors like the AC340 design shown above are essential in heat management, transmitting visible light while reflecting near infrared (NIR) light from system light sources or the ambient environment that can cause optical systems to build up heat. Also described sometimes as short-pass filters or beamsplitters, they may pass a single wavelength or the full visible band while blocking NIR wavelengths up to 1500 nm or beyond.

A cold mirror, in contrast, acts as a long-pass filter. This can be useful in lidar systems, reflecting the visible wavelengths while transmitting the detection wavelength (such as 905 nm or 1550 nm) to exclude ambient light from the system and maximize signal to noise.

Dichroic beamsplitters are also used frequently for general beam combining or separation, such as routing of the excitation and emission paths in fluorescence systems and microscopes. One of our most popular applications of beam combiners is for beam alignment, overlapping a visible 633 nm alignment beam with an invisible 1064 nm laser beam. This technique is also popular in vision and metrology systems, or for windows in laser-based detection systems to prevent viewing into the system itself. 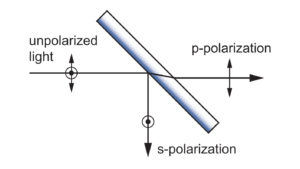 The final class of beamsplitters we’ll discuss act only on the polarization of the light over the specified band. By transmitting p-polarized light with extremely high efficiency while reflecting s-polarized light, they allow selection or splitting by polarization rather than wavelength of light. They are excellent for laser beam routing and combining, as two orthogonally polarized lasers can be combined to increase power; two different wavelengths can also be combined based on polarization instead of wavelength. We have experience with them all at AccuCoat, and can design polarizing beamsplitters for single wavelengths and broad bandwidths such as the AC330 polarizing cube shown above. 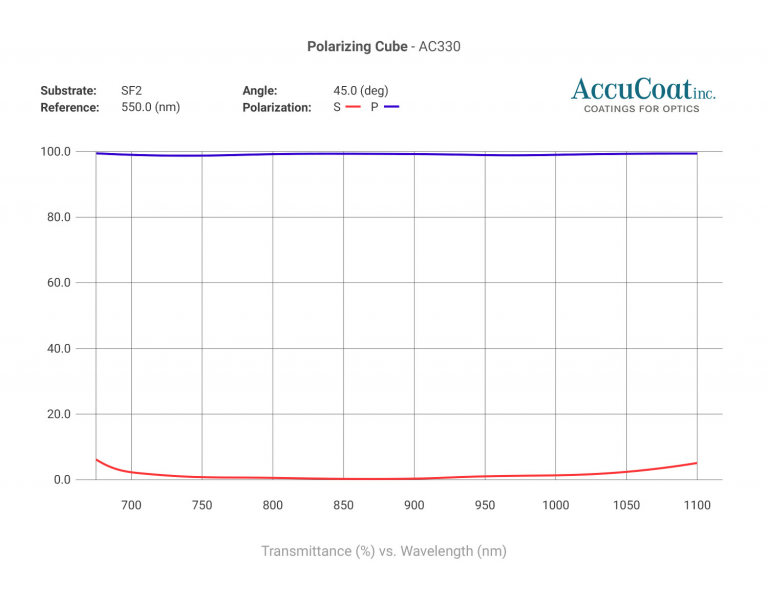 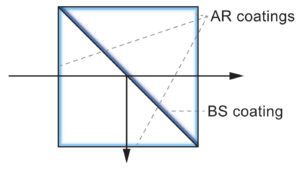 One of our areas of specialty at AccuCoat are the coatings for beamsplitter assemblies such as cubes. These use an “immersed” design in which the beamsplitter coating is sandwiched between two prisms to eliminate walkoff and simplify alignment. To create a beamsplitter cube, the hypotenuse of the first prism must first be coated before being cemented to the second prism. The exterior optical faces of the finished assembly are then AR-coated to minimize losses.

The challenge here lies in the coating of a cemented assembly. This can be done reliably on glass by working at a coating temperature well below the limits of the optical adhesive. Plastic or polymer prisms, however, can withstand much less heat before deformation becomes an issue. Even a small amount of deformation or melting of the thinner corners of a prism can prevent proper fitting to the second prism. Application of AR coatings to the final assembly compounds the challenge, and demands low-temperature coating methods to avoid damage to or delamination of the optical adhesive. Our extensive experience in coating polymer and plastic substrates is the foundation for our methods for coating beamsplitter assemblies with excellent durability and reliability.

We design and coat beamsplitters for wavelengths across the visible and NIR, from 400 nm to 1500 nm and beyond. Most are AR coated on the backside to improve efficiency and minimize ghost beams. We are able to apply beamsplitter coatings on parts ranging from 2 mm to 450 mm in size, including plate glass, slightly curved surfaces, and complex shapes like the molded or diamond-turned polymer optics used in goggles and heads-up displays.

When sourcing an optic as versatile and ubiquitous as the beamsplitter, it’s important to work with a supplier who understands your application and takes the time to get the little things right. At AccuCoat, we have experience with the many types and applications of beamsplitters, from bar-code scanners and heads-up displays to range finders, microscopes, and AR/MR systems. Contact us today to discuss your needs.